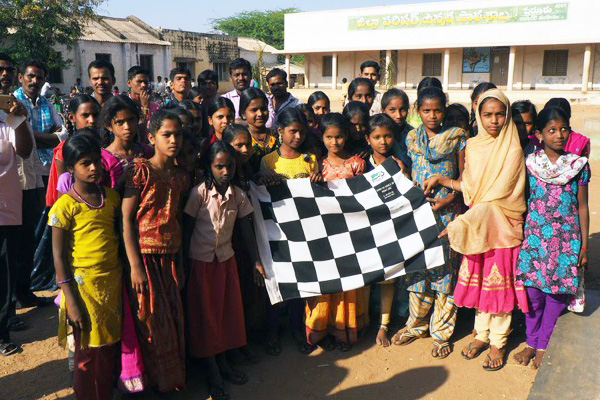 Thanks to the collaboration of participants, public assistants, organization and other activities carried out in the BMW Classic Series and ECOseries of the year 2016, RallyClassics was able to collaborate in the solidarity cause of the Fudación Vicente Ferrer, an NGO that I have already delivered A large number of bicycles to many disadvantaged children of Andhara Pradesh.

In the final of the BMW Classic Series and ECOseries of the past 2016 held at the Barcelona-Catalunya Circuit, the Vicente Ferrer Foundation, with the Penya Motorista Barcelona, ​​were present to raise awareness and support the “One Bicycle changes his life “.

The objective of this solidarity project is to get 200 bicycles and ensure that girls from the towns of Gudibanda and Rolla (Andhra Pradesh) have access to secondary education. Unfortunately, this is a country where 100 million school-age children do not go to school and the literacy rate of low-grade girls in some rural areas is less than 35%.

Thus, thanks to the collaboration of participants, public assistants, organization and activities carried out as the master class of zumba, a total of nine bikes were collected in favor of the solidarity cause. Lancy Dodem, representing the foundation, was responsible for publicizing the project among those attending the Barcelona-Catalunya Circuit.

The Vicente Ferrer Foundation is a development NGO committed to transforming one of the poorest and most needy areas of India, the Andhra Pradesh and Telangana states and the most vulnerable and at risk of exclusion communities, including Dalit, tribal groups and disadvantaged castes.