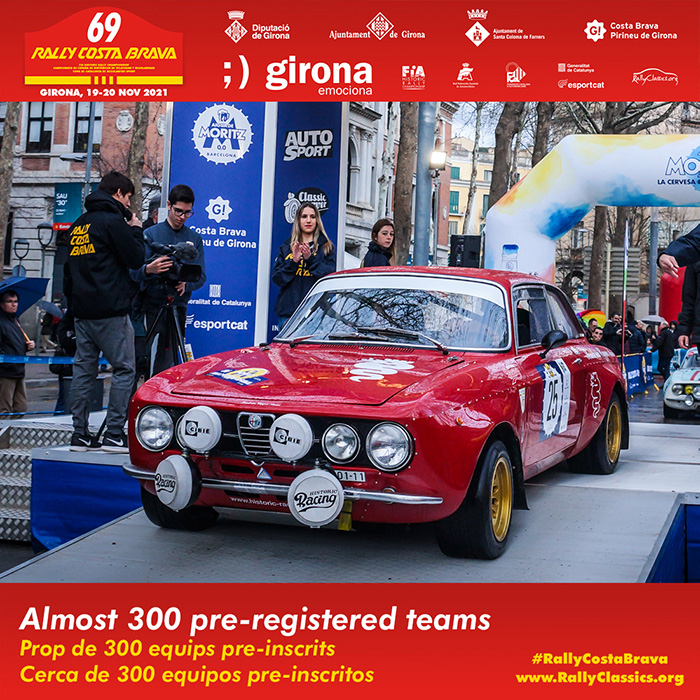 The oldest rally in Spain is making steady progress towards an edition that, due to the pandemic, will be held exceptionally in November.

During the past several months, all interested teams have been able to pre-register for the rally, before the registration period officially opens. This has allowed the organization to confirm the great interest that the rally continues to generate, as demonstrated by the almost 300 pre-registered teams, with representatives from more than 20 countries and such illustrious names as those of “Lucky”, Jari Latvala, Harri Toivonen, Andrea Zanussi, Romain Dumas or Adartico Vudafieri, the latter commemorating the 40th anniversary of his victory in the Rally Costa Brava 1981.

The current list of pre-registered teams can be viewed here.

More information about the 69 Rally Costa Brava coming up soon.

This website uses cookies to improve your experience while you navigate through the website. Out of these, the cookies that are categorized as necessary are stored on your browser as they are essential for the working of basic functionalities of the website. We also use third-party cookies that help us analyze and understand how you use this website. These cookies will be stored in your browser only with your consent. You also have the option to opt-out of these cookies. But opting out of some of these cookies may affect your browsing experience.
Necessary Siempre activado

Any cookies that may not be particularly necessary for the website to function and is used specifically to collect user personal data via analytics, ads, other embedded contents are termed as non-necessary cookies. It is mandatory to procure user consent prior to running these cookies on your website.