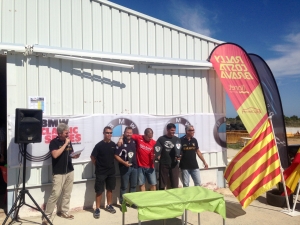 BMW Classic Series will live, after the surprising result at Calafat, a thrilling final on 17 October at Barcelona’s Circuit de Catalunya.
The victory Dastarac-Piau (3 times winners of the 1000 francecses Tours, 2011-2013) places them as leaders of the championship (119 points) just midpoint of Palau-Martinez (the Xerox team, who yesterday ran out of brakes and fell to 23rd place after winning the 1st run -118.5 p-).
Vinches Balasse are placed 3rd in the championship (74 p) after the second place in Calafat, where his Ecurie Pays Basque returned to win the team trophy. Eduardo Conde (father and son) placed his BMW on the 3rd step of the podium, besides being awarded the trophy son Junior-30.
In the motorbike category, he highlighted the magnificent 4th place Ivan Tibau, secretari General of Sport of the Generalitat de Catalunya, who despite his busy schedule was to deliver the trophies to Miquel Colomeda, Daniel Alcalá and Oscar Moret. 2-wheel championship still led by Josep Benaiges (105 points), Alejandro Tejedo (96 p.) And Miquel Colomeda (93.5 p.)