Mazda TAC conquers the first two positions of the ECOseries 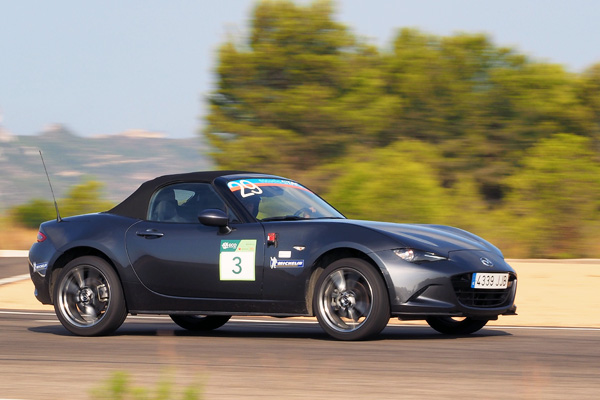 In its second year as participants in the ECOseries, the Mazda TAC team took the top two podium positions in the Catalunya Efficiency and Regularity Championship, ECOseries 2016. Miguel Martín and Joan Mussull were the drivers aboard two Mazda MX-5 . José María Carbonell, Joan Codinach and Eloi Alsina alternated as co-pilots. The performance of the Mazda earned them victory in all races, punctuated by efficiency and regularity. Joan Mussull won the ECOseries title thanks to his 191.5 points, followed very closely by Miguel Martin, runner-up with 190 points. The third place was for the pilot of Mercedes Alberto de la Torre, who obtained 160 points.

In the current season, the championship consists of six scoring races, three of them in rallies and three in circuits. The Mazda TAC Team managed to win all six victories, in addition to achieving the double (first and second place) in four of them. In regularity, despite the little experience of the Mazda TAC Team drivers, four victories were achieved, three by Miguel Martín and one by Joan Mussull. As for the Efficiency modality, they were six wins, also six doubles. At the level of consumption, it should be noted that the two cars of the Mazda team used less fuel liters than the following positioned, consuming 150.16 liters of gasoline versus 157.83 liters of diesel. As far as emissions are concerned, the Mazda MX-5, homologated in 154 CO2 emissions, remained at 154.83.